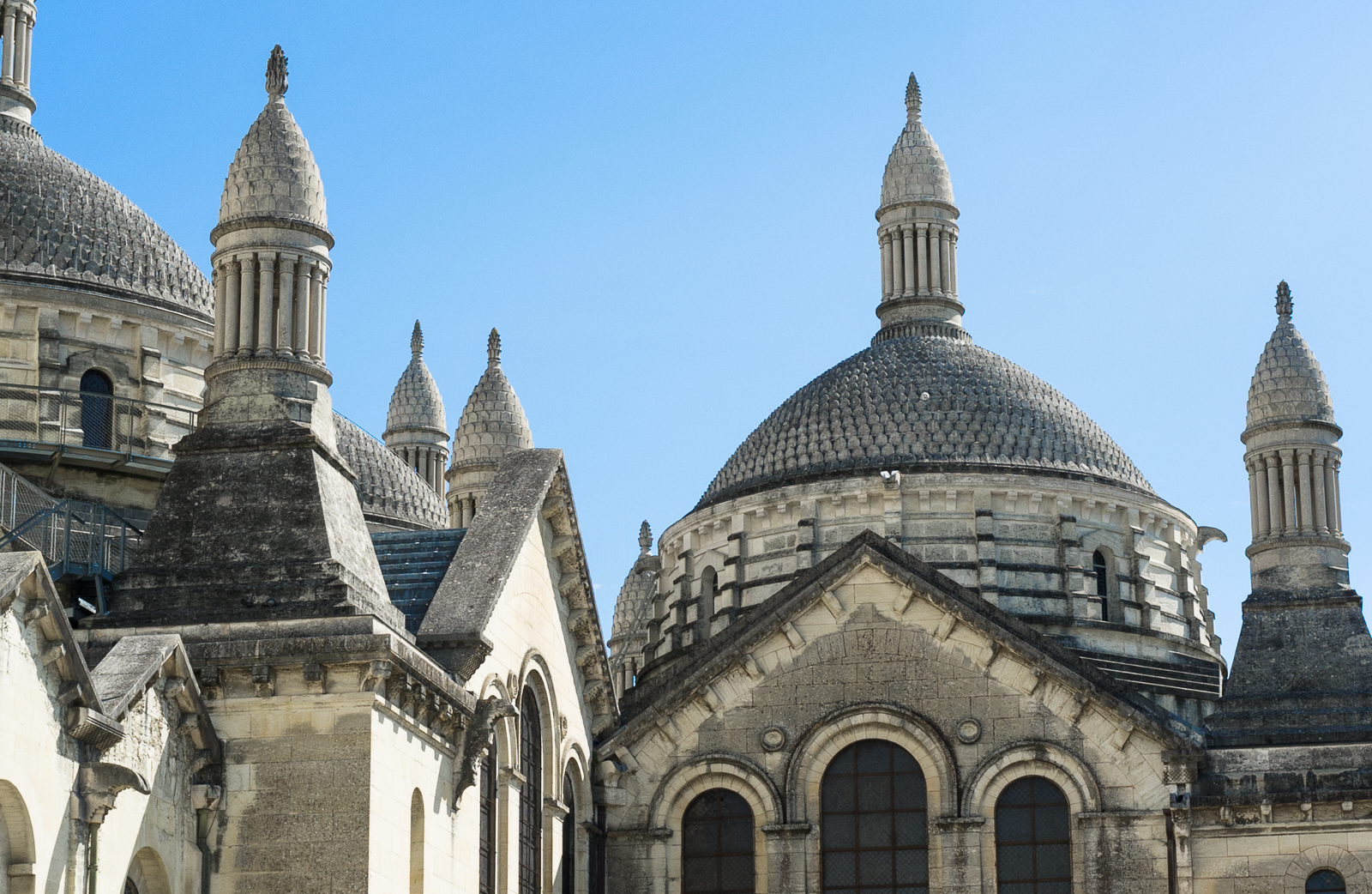 The town of Périgueux is situated in Dordogne in south-western France, but the five cupolas and turrets of the Saint-Front Cathedral seem to belong to another part of the world. It was modeled after the San Marco Cathedral in Venice, which was originally based on the 6th century church of the Holy Apostles in Byzantine Constantinople. Saint-Front’s characteristic domes then went on to become the blueprint for the iconic profile of the Sacré-Coeur Basilica on the Montmarte hill in Paris.

The architect Paul Abadie also designed Sacré-Coeur in Paris, built in the wake of the reconstruction of Saint-Front in Périgueux. He and his team enlarged the domes of the old and damaged Saint-Front basilica in the years between 1852 and 1895. As with San Marco in Venice, the floor plan of Saint-Front is based on a Greek cross layout, each arm being of equal length.

The history of the cathedral is linked to the legend of Saint-Front who evangelized Périgord in the 4th or 5th century. The first church was built by here around 500-536 but the Normans destroyed it around 845.

Bishop Frotaire was sent to Périgueux in 976 to build the abbey of Saint-Front, to be consecrated in 1047. The abbey church could not accommodate the pilgrims on the way to Compostela, so a dome church was built in the 11th century. It was placed in extension of the existing church and the altar was used for both churches.

The « old church » had its choir to the east and the new to the west. In 1525 a parish church was built where the chapel of the Virgin is now.

In 1551 and 1575, the Huguenots pillaged Saint-Front and destroyed the furniture. The relics of Saint-Front were carried and thrown into the Dordogne river. Between 1760 and 1764 the cupolas, in very bad condition, were covered with a cruciform framework covered with slates.

Although based on Byzantine plans and ideals, Saint-Front is also distinctly Romanensque in style, most evident in the interior. But whereas this style traditionally tend to be rather bulky with much wider aisles, Saint-Front is powerful, yet open and spacious, despite the imposing stone walls and pillars.

Santiago de Compostela was the supreme goal for pious pilgrims who converged there from all over Europe throughout the Middle Ages. To reach Spain pilgrims had to pass through France. The Pilgrimage Route played a key role in religious and cultural exchange and development during the later Middle Ages. The spiritual and physical needs of pilgrims travelling to Santiago de Compostela were met by the development of a number of specialized types of edifice, many of which originated or were further developed in France. (UNESCO)

The Saint-Front cathedral was inscribed on the World Heritage list in 1998 as part of the French Routes of Santiago de Compostela.

If you’re in Bordeaux

In addition to Périgueux and Paris, Paul Abadie’s characteristic cupola can also be seen in Bordeaux, crowning the Sainte-Marie de la Bastide church in the La Bastide neighbourhood, a short walk from the far side of the iconic Pont de Pierre bridge. His work can also be seen in numerous other religious buildings both in Dordogne and in and around Bordeaux, among them the Cathedral of Saint-André of Bordeaux.

Rue Limogeanne is one of the busiest pedestrian shopping streets in Perigueux. Here you will also find some interesting Renaissance buildings such as the Hôtel de Mèredieu and Maison Estignard with ornate carvings and inner courtyards.