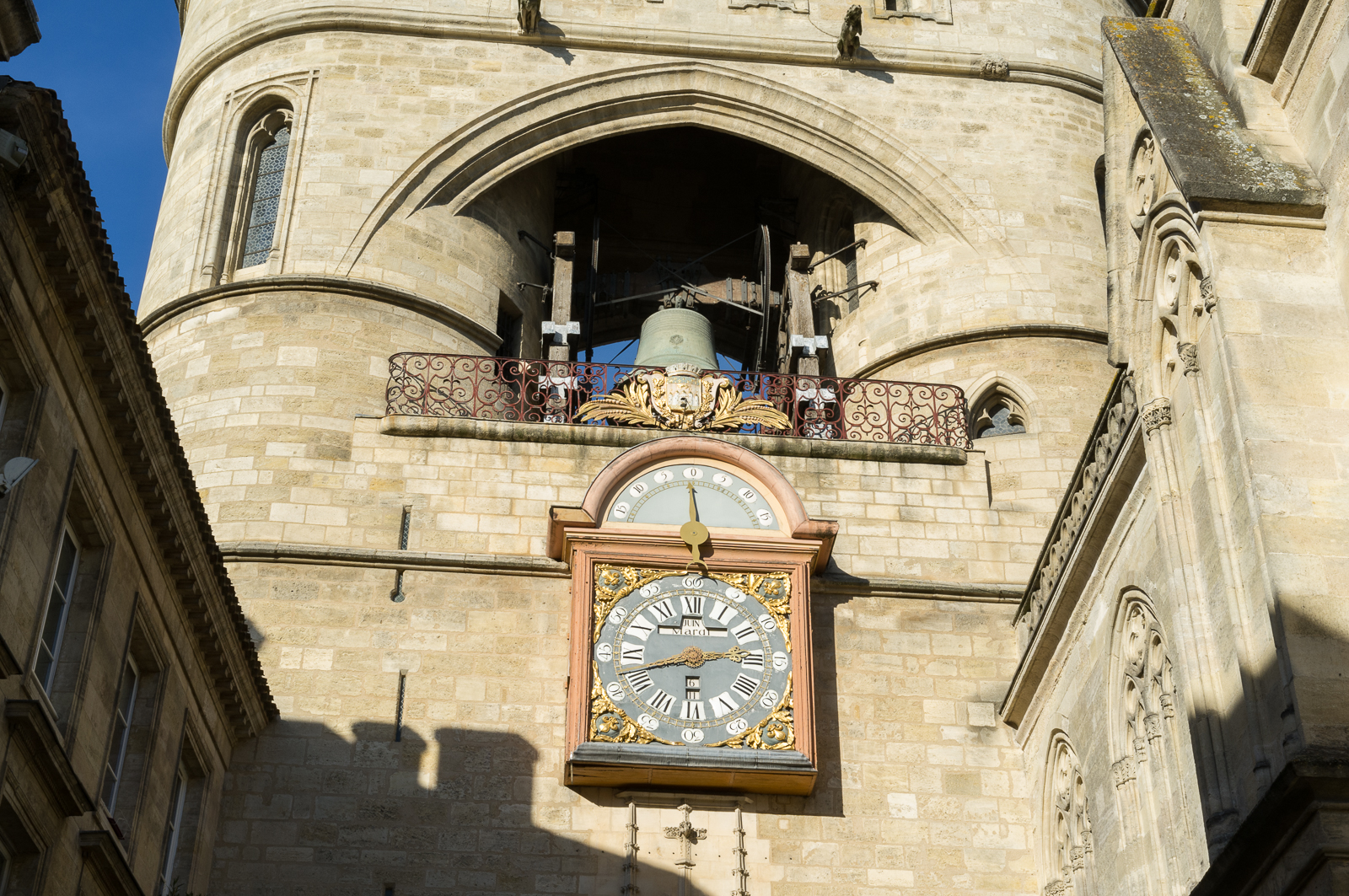 The big bell, baptized “Armande Louise”, is mostly known by the nickname “La Grosse Cloche” among locals. This is the only remaining vestige of the old ramparts of the city, visible at the top end of the Rue Saint James street. Open for visits, this gate beckons you by way of the majesty of its towers and its clock. Both visitors and locals have the opportunity to hear the bell in action every first Sunday of the month, at noon.

The Big Bell represents a monument in and of itself and it is particularly dear to the people of Bordeaux. As a symbol, it appeared on the coat of arms of the city at the end of the fourteenth century. The elements that constitute the entire gate, “Porte Saint Eloi”, are the belfry and its clock, the adjacent towers and the underground gaols. All were integrated into the ancient medieval walls and attached to the Church of Saint Eloi.

The magistrates of the city rang it to announce the harvest or to prevent a fire in the city. When the King wanted to punish the population of Bordeaux for insubordination (non-compliance of curfew for example), he would order to have the bell and the clock removed, like Henry II did in 1548 in retaliation against the jacqueries.

Built on the remains of the Porte Saint-Eloy parish gate, or “Porte Saint James”, it opened the way for pilgrims on the way to Saint Jacques (Santiago) de Compostela in Spain. Th route is inscribed on the UNESCO World Heritage list. This explains the name of the street, “Saint James”, the Gascon version of “Saint Jacques”.

La Grosse Cloche underwent many modifications up until the 18th century but the monument as a whole is one of the rare, remaining medieval vestiges of Bordeaux, (together with Porte Cailhau in particular). The current bell, cast by the founder Trumeau in 1775, is in fact the sixth to be set up in this belfry, the fifth having been cracked when sounding the alarm during the fire of 1774.

Engraved along the rim of the bell is a play with words in Latin, designating its functions:

On the exterior of the bell are the coat of arms of the City of Bordeaux, France, Marshal Richelieu, the governor of the Province of Guyenne and the Duchess of Aiguillon.

On the inside of the bell one can read the following inscription:
“My tolls mark the time, my voice calls to arms, I have songs for all the joyous, I have tears for all the dead“.

The belfry is surmounted by a weather vane in the form of a gold leopard, representing the arms of the Province of English Guyenne, of which Bordeaux was the capital.

A Visit Full of Surprises

During a visit of the Grosse Cloche you will discover hidden rooms underground that attest to its dark past: the belfry had prison cells! It is said that prisoners were locked up only 15 days behind 10 cm thick doors. However, the writings on the walls seem to tell a different story …

The bell, Armande Louise, has generous forms, weighing nearly 7.750 kg. It is 2 meters high and 2 meters in diameter. The bell’s weight and some cracks make it fragile and sensitive to vibrations.

10 June 2022
Hosten and the Domaine des Lacs d’Hostens is located at the heart of the Landes de Gascogne forest (50 km south of Bordeaux), which...