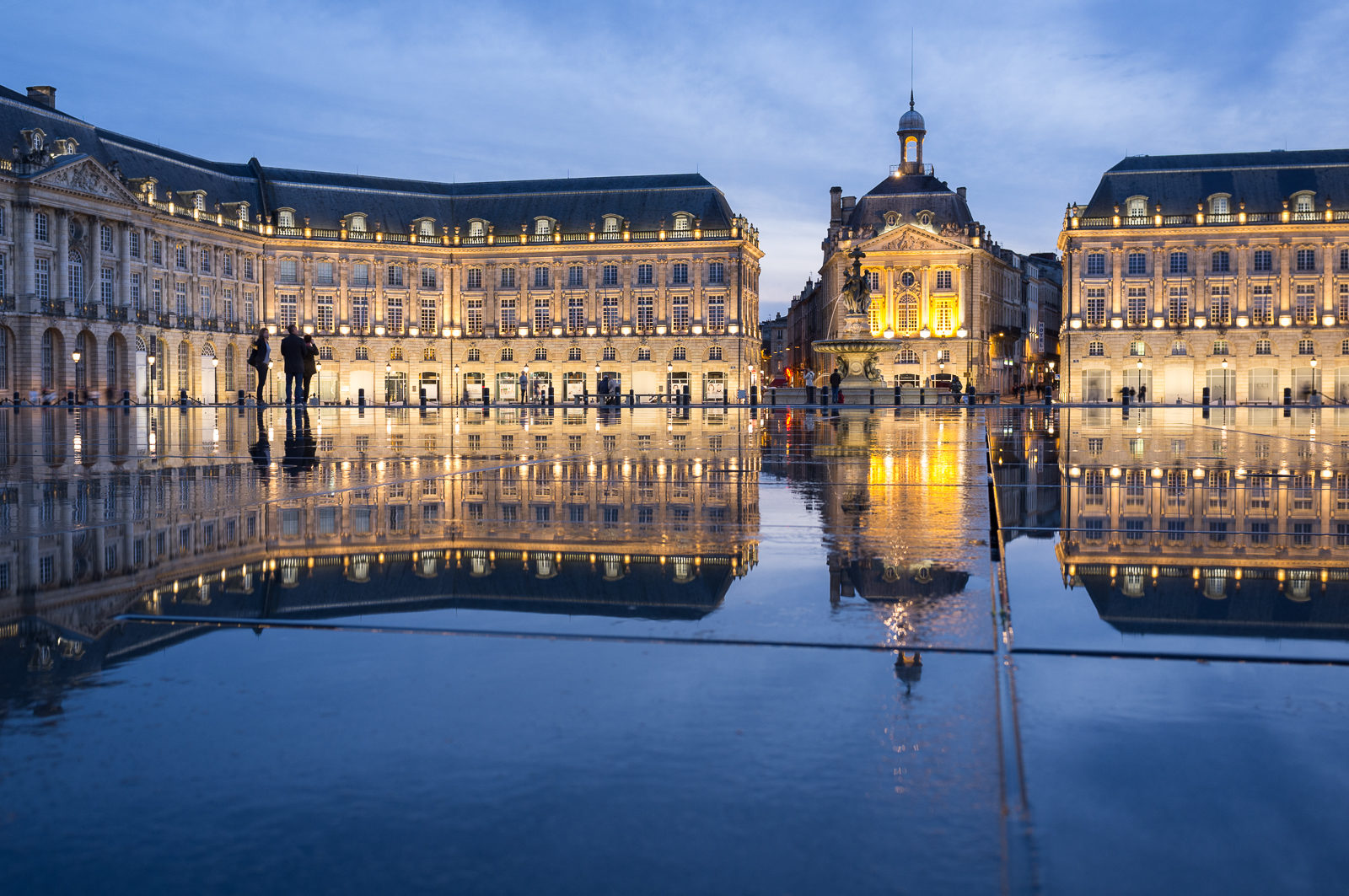 Emblems of the city of Bordeaux and known throughout the world, the Place de la Bourse and its equally spectacular water mirror contribute to the flourishing of the city and they showcase its spirits. Inaugurated in 1749, this square with façades decorated with masks and ironwork is an example of classical French architecture that breaks with that of medieval Bordeaux. It hosts at its center the Fountain of Three Graces.

An Opening Of The City

In 1730, intendant Claude Boucher secured the services of the King’s architect to lead the construction of a new royal square, designed to create a prestigious space to embellish the city and to showcase the equestrian statue of Louis XV. A true urban and architectural revolution, Place de la Bourse is an example of classical French architecture, made by the architect of King Jacques Gabriel, and completed by his son Ange-Jacques.

Place de la Bourse freed Bordeaux from part of its medieval walls, giving it a more modern and glorious image to visitors and merchants arriving from the right bank.

This rectangular square looks towards the Garonne and deploys two major axes towards the old centre. As its backdrop, it exhibits elegant and sequenced facades, adorned with masks and ironwork, perfectly representing the classical architecture of the 18th century.
The place now hosts at its centre the Fountain of the Three Graces.

A Game Of Myths And Symbols

The square comprises on the north side the former Palais de la Bourse, which now houses the Bordeaux Chambers of Commerce and Industry, and on the south side the Hôtel des Fermes, now the National Customs Museum.

The square offers a masterly jewel in the Fountain of the Three Graces (Trois Grâces), which dominates the centre of the square. Built in 1869, it was designed by Louis Visconti, the architect of Napoleon’s tomb at Les Invalides, and sculpted by Charles Gumery.

The facades of blond stone are richly decorated with allegories and symbols. Neptune, God of the Seas and protector of seafarers shares the scene with Bacchus, God of Wine, Mercury, God of Commerce, and Minerva, Goddess of War and the Arts. They discreetly tell the story of Bordeaux, through divine characters but also through female faces, like those African women, recalling the slave trade that created the wealth in the Port of the Moon.

Half Of Place Vendôme

Place de la Bourse contributed to the urban mutation and the rise of the city, to its greatness and reputation, a symbol of the opening of Bordeaux, towards the river Garonne. Victor Hugo described it as: “This royal square is simply half of Place Vendôme [in Paris], placed at the water’s edge.”

Place de la Bourse blends wonderfully with the Miroir d’eau, and offers a prestigious decoration to many events of the Girondine capital, the mecca of the Fête du Fleuve and the Fête du Vin, one wonders: who is the most beautiful, the place itself or its image reflected on the Miroir d’eau?

27 June 2022
The big bell, baptized "Armande Louise", is mostly known by the nickname "La Grosse Cloche" among locals. This is the only remaining vestige of...