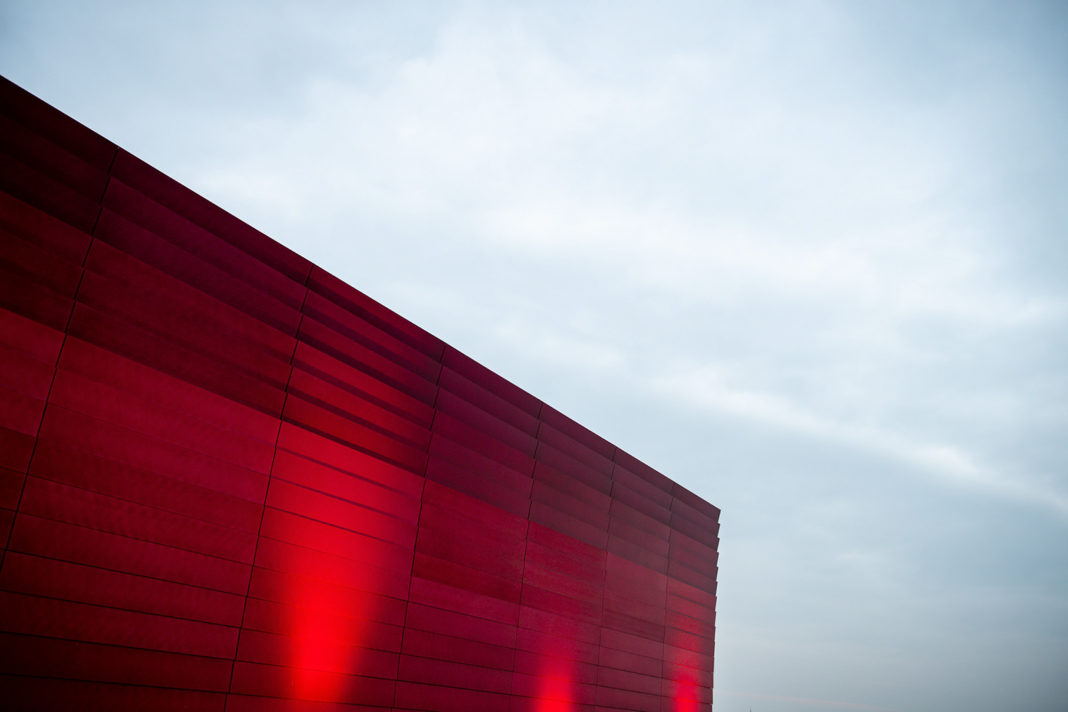 A visit to the village of Saint-Émilion would not be complete without a visit to one of the regions many wineries. Château La Dominique captivates not only wine enthusiasts, but also lovers of architecture and good food.

The architect behind the renewal of Château Le Dominique was Jean Nouvel, a Pritzker Prize winner in 2008, known for works such as the Arab World Institute in Paris, the Agbar Tower in Barcelona and the Louvre Museum in Abu Dhabi, among others. In addition to Jean Nouvel, the artists Anish Kapoor and Jeff Koons were also involved.

«La Dominique has managed to stand out and position itself as an example of a symbiosis between innovative architecture and the traditional wine world, as it has managed to integrate the modern building into a historic cellar from 16th century»

Combining Innovation and Tradition with Colour and Form

The result is one of a boat-shaped building integrated in the old structure, creating more production space and introducing a more advanced technology system.

This alluring mixture of the traditional and the avant-garde attract both tourists interested in wine and architecture as well as students of architecture from all over the world.

Head of Tourism of the château, Claudia Varas-Rubio tells us that this winery, owned by the Fayat family since 1969, “has become an example of the integration of a modern building within a Unesco World Heritage environment”, after the renovation which was completed in 2014.

You cannot talk about La Dominique without mentioning the façade. Here the lifecycle of a wine is told through its colours. For every three plates there is a different red that goes from dark red, almost garnet, the colour of the wine in its first few months, to an orange-red typical of the oldest wines and liqueurs. There are six different tones. The metallic sheets are concave, which creates a mirror effect depending on the perspective from which one looks, reflecting the sky and the surrounding vineyard landscape.

The former tasting area has been converted into the spectacular La Terrasse Rouge panoramic restaurant.

The restaurant is fully glazed with a panoramic view over a sea of vineyards and a pool of red-coloured crystals that evokes the grapes when they have been collected for wine making.

La Terrasse Rouge is a bistronomic style restaurant managed by Nicolas Lascombes and his team. This is the perfect place to taste the delicacies of the south-west, such as foi-gras or black truffle.

Their dishes reflect the winery’s own style, seeking a balance between classic and modern, either à la carte or by the menu.

A visit to La Dominique is an unforgettable experience, both for its spectacular architecture and for its wine and gastronomy. Guided tours are available in French, English and Spanish.

Château la Dominique has two types of wines with the Denomination of Origin Saint-Émilion. Their Grand Crus Classés, a classification that distinguishes the best wines of the area, stands out for its quality and prestige.