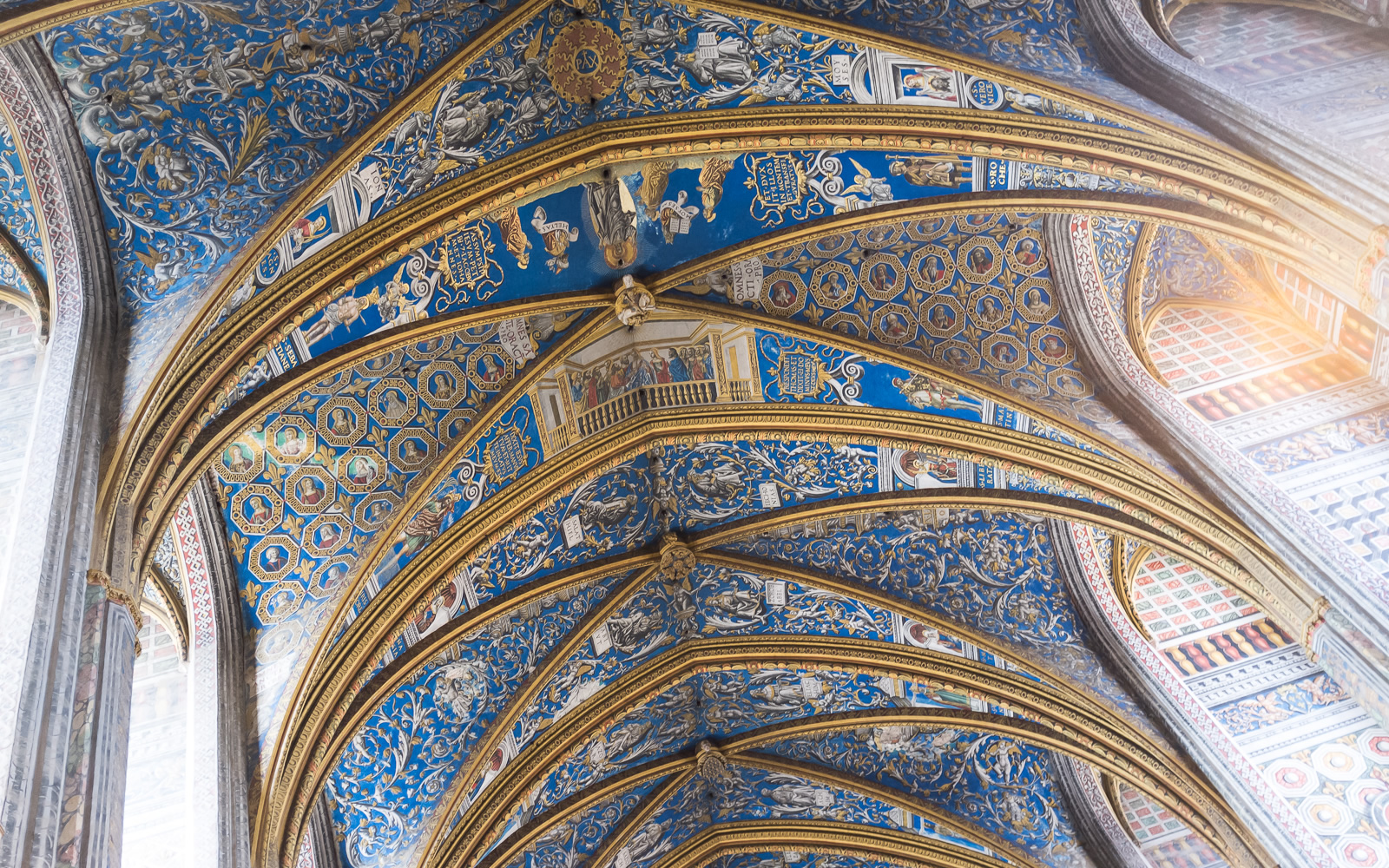 The City of Albi is situated by the River Tarn, about an hour’s train ride from Toulouse in the Languedoc-Roussillon region in southern France. As you leave the Albi Ville station building you can catch a glimpse of the majestic bell tower of the Cathedral of Sainte-Cécile rising prominently above the roof tops, like a beacon guiding your way. After a short walk through the quiet suburbs you will find yourself in a town centre which immediately draws you in and warmly embraces you with its narrow streets, brick houses and medieval facades.

The fortress-like Cathedral of Sainte-Cécile totally dominates the inner town centre and square. It dates back to the late 13th century, to the decades following the Cathar heresy and the gruesome years of the Albigensian Crusade. Built to protect and demonstrate the power of the Roman Catholic clergy, Sainte-Cécile is said to be the largest brick cathedral in the world, 113 m long and 35 m wide, with a 78 m tower high from 1492. Adjacent to the imposing cathedral, extending almost down to the Tarn river, is the Berbie Palace, home to the wonderfully evocative poster-art of Albi native Henri de Toulouse-Lautrec.

Both the cathedral and the palace are built with the characteristic red-orange brick, so-called fired brick, typical of Albi. The plain appearance of the cathedral exterior, however, reveals nothing of its elaborately decorated interior.

It’s All In The Details

The heavenly blue vault divided by slender, golden cross-ribs which seem to fly above you was decorated by painters from Modena and Bologna (Italy) in the early 16th century. The extremely orderly designs of the window bays and vault contrast sharply with the dark but vivid scenes of eternally tormented sinners in Hell in the huge mural of “The Last Judgement”. The rather explicit paintings of the seven deadly sins begin with pride on the left side and ends with punishment on the right. The central section, depicting the lazy, was destroyed in the 17th century.

If you are not already rendered speechless by the sheer splendour of the ornate interior, then the choir screen, an enclosure within the nave with seating along richly sculpted inner walls, most certainly will. The screen dates from around 1480 and consists of a host of carefully carved and painted angels, some 72 in total; plus 33 figures from the Old Testament; the Twelve Apostles, the Virgin, John the Baptist and St. Paul from the New Testament. The attention to detail and plan in Cathedral of Sainte-Cécile is simply astounding.

Albi became an important episcopal city following the Albigensian Crusade against the Cathars in the 13th century. The Cathedral of Sainte-Cécile is the heart of the Episcopal City of Albi World Heritage Site (2010). Also enlisted is its neighbour, the Palais de la Berbie where the bishops lived, the Old Bridge (Pont-Vieux) over River Tarn, the Saint-Salvi church, as well as residential town quarters that remain largely unchanged since the middle ages.

The historic city of Albi represents an outstanding example of medieval architecture, expressed through a high-quality urban landscape and consistent use of local fired brick. Sainte-Cécile Cathedral is an exceptional architectural and decorative example of the adaptation of the Gothic style to the context of Southern France. (UNESCO)